Adhesive Capsulitis: How to Thaw a Frozen Shoulder

Those who have had the misfortune of experiencing adhesive capsulitis–commonly
known as “frozen shoulder”–are well-acquainted with the tedious and uncomfortable process of
getting it to subside, or “thaw.” Characterized by inflammation in the stabilizing ligaments of the
shoulder, capsulitis can lead to a profound decrease in function due to a tightening and/or
thickening of these structures, as well as the development of dense scar tissue known as
adhesions.

The origin of this oft-misunderstood ailment can vary, but tend to fall into two general
categories. Cases that develop after a trauma or illness, such as post-fracture, stroke, or
surgical repair, are known as “secondary capsulitis.” Instances that develop idiopathically, or
without a known trauma or illness, are deemed “primary capsulitis.” This “primary” type usually
affects the non-dominant side and is seen most commonly in females above the age of 40,
which accounts for 70% of all cases.

Regardless of what demographic a patient may fall within, the hallmark presentation of
capsulitis remains consistent: increased pain in and around the involved shoulder, as well as a
significant decrease in the motion of the joint. Progression of these symptoms is further divided
into three stages: Freezing/Painful, Frozen, and Thawing. As we see a patient’s self-reported
pain rating INCREASE during the initial “freezing” stage, we also tend to observe a DECREASE
in the active range of motion in the joint, and vice-versa toward the end of the “frozen” and
beginning of “thawing” stage. 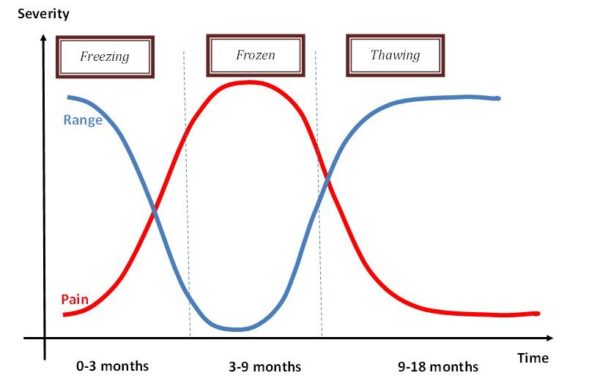 Although capsulitis can be a painful and limiting issue, accurate diagnosis in the early
stage of development, with a timely start of physical therapy treatment, can be an effective non-
surgical solution. In addition to alleviating the patient’s short-term pain, a treatment approach
combining manual techniques (i.e., passive stretching and joint mobilizations) with therapeutic
exercise to increase strength/stability of the shoulder joint and surrounding postural muscles,
can minimize the possibility of long-term functional deficits or disability.

If you think that you may be developing a frozen shoulder–or any other shoulder issue
affecting your daily activities–please consult a licensed Physical Therapist to properly diagnose
and treat your particular issue, thus maximizing return of function and quality of life going
forward.

Warren is a DPT originally from New Bedford, MA, where he developed an early passion for athletics and the sciences. He attended the University of Massachusetts-Amherst, graduating in 2012 with a Bachelor’s of Science in Kinesiology, and later the University of Hartford, earning a Doctorate of Physical Therapy in 2015. Clinically, Warren has a particular interest in the treatment of orthopedic and athletic injuries, as well as post-surgical rehabilitation. Recent educational pursuits include certification in Selective Functional Movement Assessment (SFMA), Dry Needling, and training in vestibular evaluation/rehab.